The brain, gut and autism podcast

The brain, gut and autism podcast with Dr Elisa Hill-Yardin and Dr Kent Williams http://t.co/ivUvFGZvS4
Posted by Randal at 2:10 AM No comments: 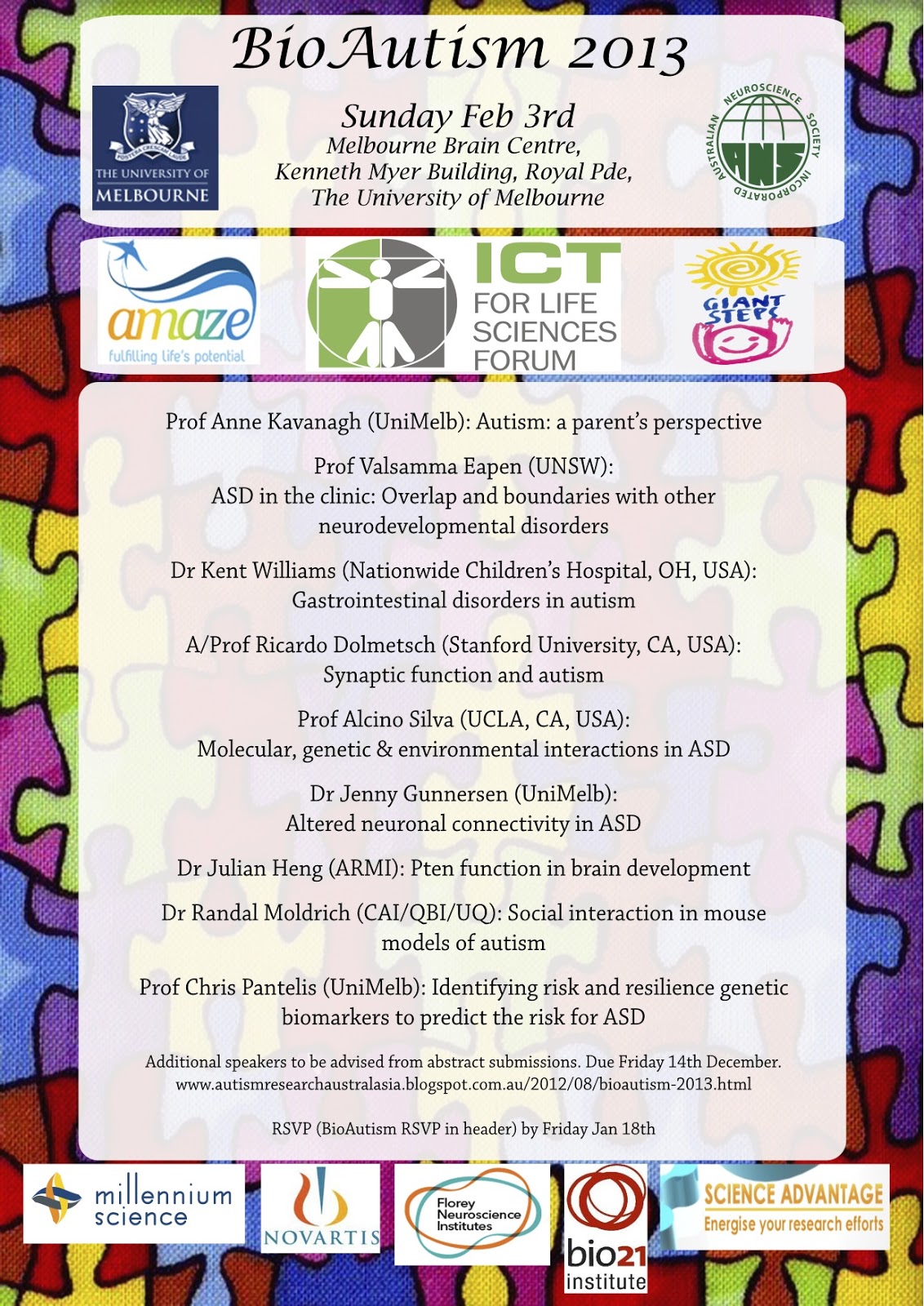 
An official 2013 ANS satellite meeting, BioAutism 2013 will focus on the neural and biological basis of autism spectrum disorders (ASD). It is estimated that 1 in 100 children are diagnosed with an autism spectrum disorder each year. While the causes of autism are not clear, in recent years significant progress has been made towards unraveling the underlying disease etiology and candidate mechanisms. The aim of this meeting is to bring together researchers working on autism spectrum disorders from multiple disciplines, with the specific goal to consider how basic and clinical research can accelerate therapies and treatments. Topics to be discussed include genetics, synaptic and circuit level mechanisms, cognitive mechanisms, animal models, moving from models and mechanisms to therapeutics. 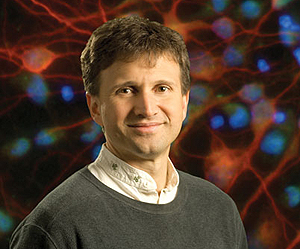 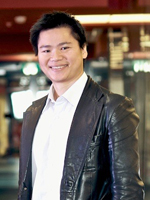 (Source: psychiatry.unimelb.edu.au)
A full program will be available closer to the day of the event.

Thanks to the generosity of our principal sponsors, University of Melbourne and Florey Neurosciences Institute, there will be no fee for registration. Your full name and title Your affiliation and addressEmail and telephone contact details and whether your have any special dietary requirements. 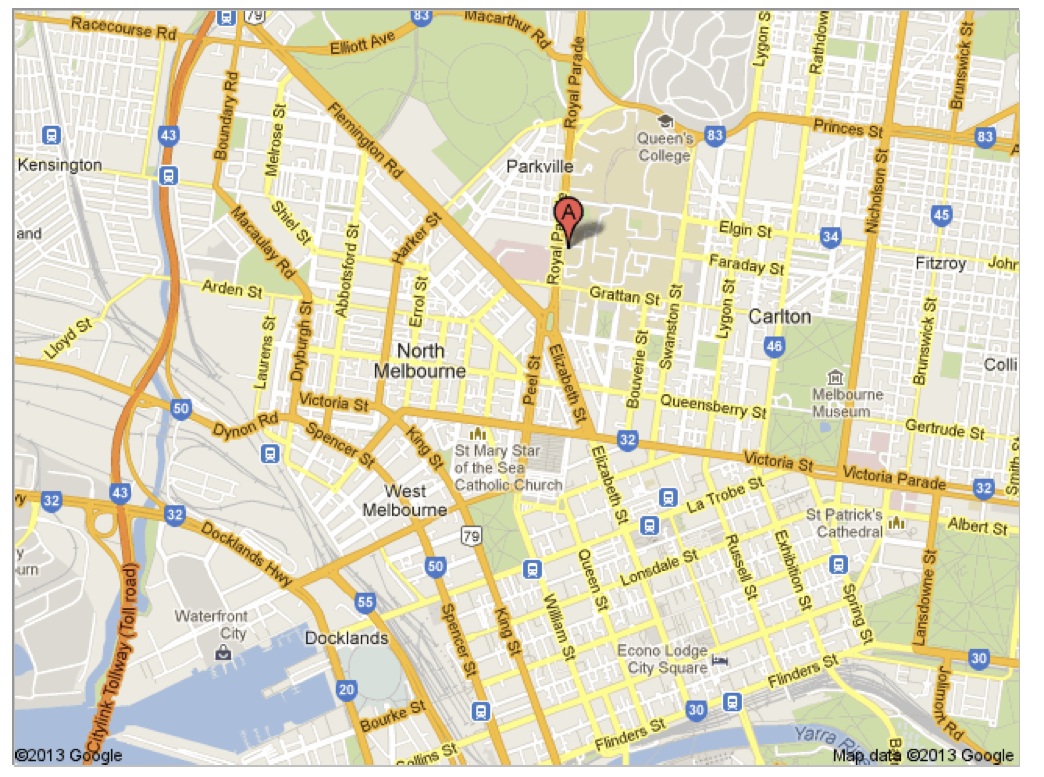 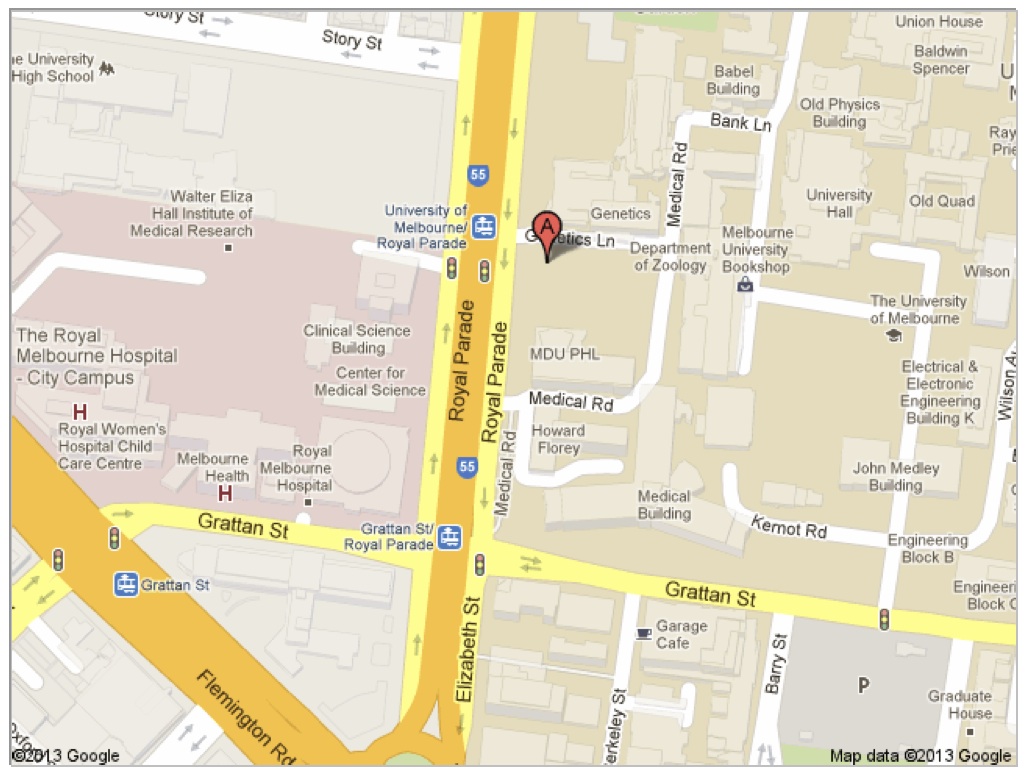 Accommodation
Accommodation adjacent to the University of Melbourne is available by contacting the colleges directly. http://www.colleges.unimelb.edu.au/information/casualaccomm.html

Transport to the Sunday ANS symposium or airport
Transport from the Melbourne Brain Centre to the Melbourne Convention Centre for the ANS symposium will be organised for departure immediately after BioAutism 2013. A series of maxi-cabs will be ordered. Parties will need to share the cab fare amongst themselves. So that we order the correct number of maxi-cabs, please notify a BioAutism committee member at the time of collecting your BioAutism name badge and program. Alternatively, if you need to go to the airport after BioAutism, please let us know.

Sponsorship
Thank you to our:
Gold Sponsors:

The University of Melbourne - Department of Physiology

There has been some very interesting research recently about how prenatal stress in the mother could contribute to the behaviour of the child. This is thought to occur at the biological level by a masking or unmasking of genetics, that affects the biological response, and ultimately the behavioural response, of the child to a particular situation. This has been demonstrated in rodent responses to fear, for example. Hence, the hypothesis has been that perhaps prenatal stress events in mothers contributes to autism in children. This has been looked at previously:
Tropical storms
Famly discord
Prenatal stress (autistic traits only)
Just published, a UK/Swedish study looked at the correlation of stressful events during pregnancy and the diagnosis of autism in children. They looked at many stressful events such as death in the family, work stress, prenancy stress, major arguments, etc. They did not find a correlation of prenatal stressful events with ASD. If prenatal stress was a major factor in a child developing ASD, then the evidence would have emerged in this study. If prenatal stress was a minor risk factor, then it may have been missed by the study. Since only acute/incidental stress events were investigated, long-term and repetitive stress events may still prove to be a major risk factor.
Randal
Posted by Randal at 5:27 PM No comments:

Autism in DSM-V: what to expect

Autism or ASD is diagnosed using criteria defined by the DSM-IV and ICD-10. Soon, both these manuals will be updated to DSM-V and ICD-11. Importantly, there are a number of changes to the definition of autism. ASD will consist of two behvaioural categories, not three. Social communication and social interaction will be combined into one category of behaviours, and the second involves repetitive and restricted behaviours (RRBs). The new criteria also subsumes all ASDs within the one title, thereby eliminating the confusion that surrounds the distinction between Asperger Syndrome, PDD-NOS and autism without intellectual disability or language delay. Hence, the prevalence rates of NOS and AS will not need to be considered. Social communication and impairment without RRBs constitute a new DSM category: Social Communication Disorder (SCD).

For researchers, this affects project design. For many years, suitable controls for ASD have been a matter of debate. Biomarkers unique to ASD (compared to typically developing (TD) individuals) may be shared by ADHD or other individuals with challenging behaviour. How autistic individuals differ from PDD-NOS, for example, will no longer be relevant. Suitable comparisons will be between ASD, SCD and TD. However, researchers are struggling to estimate or predict the prevalence of SCD. Hence, finding a suitable cohort of participants for research will be challenging.

A thorough review of the proposed changes is described here
Randal
Posted by Randal at 6:25 PM 1 comment:

The diagnosis of ASD can be complex, subjective and time-consuming. Spending large amounts of time at specialised clinics, often far from home, can be anxious. The current resources available for a diagnosis of ASD mean can cause a considerable delay between the onset of symptoms and receiving a diagnosis. A group at Harvard has addressed this problem by creating a computer program that seeks a diagnosis using the least number of interview questions. Taking the 93 typical ASD diagnostic questions, the computer program could match the traditional ASD diagnosis in 94% of cases using only 7 questions.
Such a means of diagnosis has been proposed as a screening tool, and Harvard continues to test this approach online (video and survey). If administered by first tier health care service providers such as GPs, referrals could then be made to specialists. It is unlikely that the 7 questions will be enough for a full diagnosis. A full examination by specialists will be required in any case before intervention can commence.
The full paper can be found here
The group's facebook page is here

It remains to be seen if the software can distinguish ASD from ADHD, or another developmental disorder or challenging behaviour. It would also be nice to think that international roll-out of the software, or online international access is not impeded by patent rights or prohibitive costs.